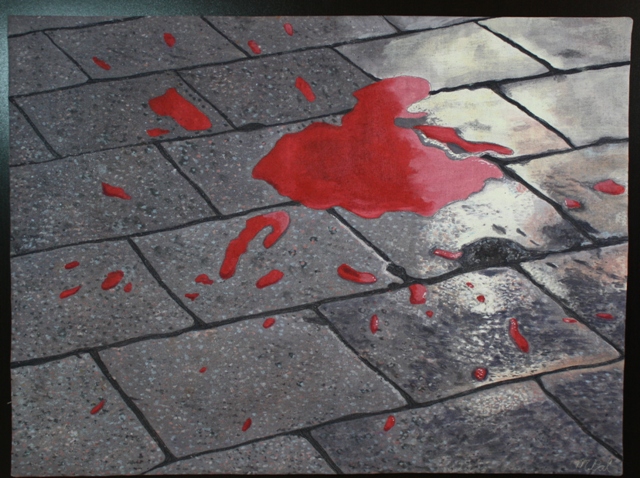 The symbol I have chosen is one you may think you know already—a rose.  This symbol generally conjures up ideas of beauty and love.  But this rose is a rose of Sarajevo.  They are all over the city in public areas and are the marks left by exploding shells during the Bosnian war 1992-96, then filled in with red resin.  Over 470,000 grenades and shells fell on Sarajevo during the siege; 50,000 citizens were wounded and 10,650 were killed, 1,601 of them being children.

What this rose represents is the death of an ordinary civilian, possibly a woman or child, who was merely standing in the street or perhaps shopping at a market or filling a bottle of drinking water when a shell exploded; it is a sign of remembrance, like our red poppy, and represents the innocents against whom these atrocities were committed.

But for me, it is a powerful symbol for peace and a caution to us all.  It is a reminder that human beings “just following orders” will kill unarmed people simply to fulfill the desires of a politician seeking glory, riches, and power, with no regard to the cost to humanity. That war has ended but the problem continues. Yesterday it was Sarajevo; today it is Syria.

I painted the quilt with Setacolor paints and quilted densely in the mortar between the stones. It is based on a photo I took in the marketplace but the rose is a composite of several I saw when visiting the city last month.

Scent of a Memory Challenge