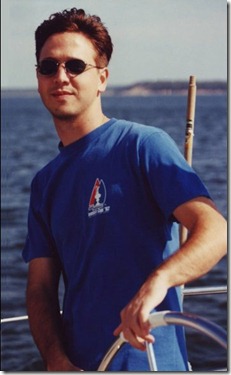 This is a tough challenge, I'm not sure if I have a grip on it even now.  But an old story came up during a conversation with friends - the first time I met my now-husband, Tom.

Before we met, Tom's reputation as a serious sailor preceded him.  My team decided to recruit him to help us win Spring Regatta.  Tom was on the Yugoslavian National Sailing Team before moving to America.  He had his own racing boat and was described as a ruthless tactician, focused, professional, disciplined, and NOT a fan of shenanigans during a race.

To put it nicely, our team "2 Thirsty" was pretty relaxed on discipline during races.  There was always a lot of chatter and joking around.  At one point we actually had a keg on board.  No way was Tom racing with us like that, so we had to get rid of the keg.

When the race began, it was clear who was calling the shots.  Those of us on the rail were there for weight and not to share our opinions about strategy.  I don't think I said a word the whole time.  I was so nervous that when we crossed the finish and heard the gun, I didn't even realize we had won!

Everyone was yelling and moving around, so I started to relax a bit.  I saw Tom coming over to me, but before I could think he hugged me!  I just froze.  He picked me up with this big smile and said "Wooo hooo! Nice job!"  I almost said "for what?" but I was too shocked to speak.  A second later, he had moved on and was congratulating everyone else on the boat.  Once I saw how much he was able to let go of stress and celebrate a victory, I felt kind of stupid for being afraid of him.

The image I had of him was correct, sort of.  It was only one side of him.  He was totally focused and serious during the race, chasing a goal and making decisions.  But once the goal was reached, he transformed into a fun-loving, smiling, cutie pie.  Hmmm… quite cute, in fact.

He still kids me about it, teasing me that I tried to jump into the ocean to avoid talking to him.  Not true!  But I admit back then I didn't handle unexpected hugs too well.  I'm better at it now. :-)

Scent of a Memory Challenge